During the last great persecution before the legalization of Christianity in the Roman Empire, the Emperor Diocletian ordered the killing of thousands of Christians for their fidelity to their faith. Among the great number of youths who gave their lives rather than abandon their faith in Jesus Christ was St. Juliana, Virgin and Martyr. Her feast falls on the anniversary of her martyrdom, February 16, 305.

According to the Martyrology of the Venerable Bede, Juliana lived in the city of Nicomedia in Bythinia (now in Turkey). Juliana was martyred for the faith when she refused to marry a Roman prefect.

Her father, the pagan Africanus, was an ambitious functionary in the Roman legions and despised Juliana simply because she had become a Christian. Against her will, he betrothed her to a Roman official, the Senator Eleusius, who had nothing but contempt for her faith and chastity. When Eleusius realized that she would not become his wife, he decided that she should be no-one’s bride. Her calling had left Juliana without a family of her own. Both men, failing to get their own way with this determined saint, treated her brutally: Juliana’s father scourged and tortured her. Eleusius flung her into jail where she was seen to be fighting with the disguised Satan, finally binding him and throwing him to the ground.

Juliana died a martyr’s death. It is said that first she was partially burned in flames; then she was plunged into a boiling cauldron of oil; finally the long-suffering saint was freed from the torments of this world by the mercifully instantaneous act of beheading.

Juliana’s struggle with Satan was one of the favorite stories of the medieval Church. What still is fascinating is its deep psychological meaning: for Satan is said to have appeared to the saint as an angel of light. His aim was to persuade her that what she had renounced in this world was in fact good.

The Roman Martyrology describes Juliana’s suffering at Nicomedia in Asia Minor, but it is more probable that she died in Naples, perhaps Cumae, where her relics are said to be enshrined. Some of them are now in Brussels, Belgium, in the church of Our Lady of Sablon. Though her story was the source of many romantic tales, according to the Venerable Bede, Juliana is clearly a historical figure as Saint Gregory the Great requested relics of her from Bishop Fortunatus of Naples for an oratory that a wealthy Christian woman had built on her estate in Campania, Italy, to honor Saint Juliana and others. On the other hand, tradition in the north of Spain holds that Saint Juliana is buried there, in a town near the Cantabrian Sea that took its name from her, Santillana del Mar. Santillana is a contraction of Santa-Iuliana. The Church of St. Juliana in Santillana is a Romanesque abbey, well over a thousand years old.

In art, Saint Juliana is sometimes shown in a cauldron, leading the devil in chains, or crowned wearing a cross on her breast. She is invoked against infectious diseases. In the paintings and stained glass of the Middle Ages, Saint Juliana is frequently shown battling with a winged devil; usually she carries a chain in order to bind him. She may also be seen with a dragon at her feet.

Though there are uncertain elements to the story of Saint Juliana, and there may be some legendary embellishments, she is a most appropriate Patroness for our Parish. St. Juliana’s unwavering commitment to her Christian faith and virtue makes her a fitting model for all the people of our Parish, especially the youth, who are confronted and tempted by the false values and allurements of modern society. Her statue is in the church above the organ. 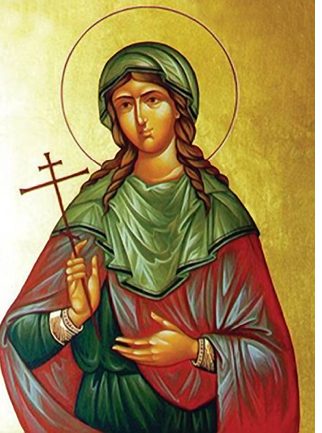 Lord God, You gave St. Juliana the crown of eternal joy because she gave her life rather than renounce the virginity she had promised in witness to Christ.
Encouraged by her generosity, help us to rise out of the bondage of our earthly desires and attain to the glory of your kingdom.
Grant this through our Lord Jesus Christ, your Son, who lives and reigns with you and the Holy Spirit.
One God, for ever and ever.
Amen.
©2023 St. Juliana Catholic Church | West Palm Beach Made with Love at Diocesan